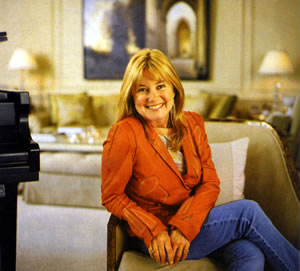 Maggie Bras doesn’t act the part of the matronly donor, that bustling, plump and proper creature of good intentions. Instead, at 57, she’s sexy and indulgent, with eyelash-sweeping bangs and an effervescent laugh that bring to mind Goldie Hawn. She lives in a sumptuous designer condo with a floor-to-ceiling view of Toronto’s downtown and the lake beyond. In the living room is a baby grand player piano. In her bedroom, along with a silk-curtained four-poster bed, sit two elegant polished mahogany dressers. “Watch this,” she says, pushing a button, and the top of one of the dressers slowly rises and a large flat-screen TV lifts noiselessly out of the false front. Bras is lucky enough to have lots of money. The rest of us are fortunate that she wants to give pots of it away.
Meet one of Canada’s new-style philanthropists. No crowd of disinterested cheque-writers, this. Typical of the boomer generation, they want to know what’s happening with their donations, and that their money is getting results. These philanthropists are more likely than their predecessors to roll up their sleeves and get involved. And the way they work is changing the way Canada’s charitable sector operates, making it more efficient and business-like. In fact, the business world as a whole is showing increasing interest in charities, arranging more cross-pollination between the two sectors than ever before.

Perhaps not surprisingly, the tech boom at the end of the ’90s was a big factor. Not all the techheads who pocketed huge sums blew everything on limos, champagne parties and penthouses. Take Bill Young, a Harvard M.B.A. and former chartered accountant who made millions investing in his cousin’s tech success, Red Hat Inc. Young, now 50 and living in Toronto, runs a $10-million charitable foundation that backs businesses with a double mandate: to remain financially sustainable and to employ people from disadvantaged backgrounds. Young’s group provides not only cash but also business advice, helping create a new kind of organization — a hybrid of for- and non-profit enterprises. Just the name of Young’s group illustrates the influence of business: Social Capital Partners. People who know Young describe him and others like him in terms that borrow heavily from business jargon: they’re “social entrepreneurs” doing “venture philanthropy.”

Bras came into her wealth, sadly, following the 2002 cancer death of her husband, Robert, who’d led a successful pet food company, Menu Foods GenPar Ltd. Recently, she established a family foundation that she is endowing with $3.6 million. Bras hopes that some of her six now-adult children will someday be active in this new venture. “We have so much — I mean, we have health and family. I want to eventually bring them on board,” she says. But her primary reason for establishing the foundation is simple. “I don’t feel the money is ours to keep,” Bras says. “It’s ours to give back.”

While she has already donated $3.5 million to Toronto’s Princess Margaret Hospital for a cancer drug development program (and with her family continues to raise money for that program), the foundation creates a formal structure for her generosity. “I can write a cheque,” Bras says. “But I want to see the difference the cheque is making.” The endowment will be invested conservatively, and the money it makes will be donated.

The foundation’s mission statement spells out the areas Bras wants to support: services for people suffering from cancer and, to a lesser extent, selected projects in the arts and women’s issues. It has already received proposals for funding from a handful of charitable organizations. The foundation also has a board of directors whose role is to research the organizations that request funding and to ensure that money goes to groups that fall within the mission statement’s guidelines. In short, to protect Bras — who readily admits she has trouble saying no when asked for help or money — from herself.

To create the foundation, Bras has relied heavily on advice from Marvi Ricker, one of Canada’s first philanthropy consultants to work for a major bank. Over the course of three months, with coaching from Ricker, Bras slowly figured out where she wanted to direct her energy and her money. “It was like being on a psychiatrist’s couch,” Bras says. “I needed to focus on not helping the world, but on the few areas that mean a lot to me.”

Ricker is new to banking. From 1992 to 2002, she ran the Richard Ivey Foundation, one of Canada’s largest family charities, which has handed out almost $60 million in grants since its creation in 1947. But she was lured to Bank of Montreal with a made-to-measure job: managing director of philanthropic services at Harris Private Banking, a division that caters to wealthy customers. “I help people find their fingerprint in philanthropy,” Ricker says. In addition to her one-on-one work with customers like Bras, helping them administer private foundations or grant-making programs, one of Ricker’s first moves at the bank was to make an alliance between it and Community Foundations of Canada, an association of charitable foundations, allowing customers to set up their own charitable funds. The bank manages the investment (minimum $25,000), while a local community foundation, with the donor, manages the granting process.

Toronto-Dominion Bank has also stepped into the philanthropy field. Last October, it established a charitable foundation, modelled on a plan that was pioneered in 1992 by Boston-based mutual fund giant Fidelity Investments. With a minimum donation of $10,000, TD customers can establish an endowment fund for charitable organizations of their choice. Jo-Anne Ryan, architect of TD’s foundation, is the head of philanthropic strategies for the bank. “We want to be sure that we’re discussing philanthropy as part of our financial advice,” Ryan says. The foundation is one more way that people can give, “and the more options there are, the more money there is flowing to charitable groups,” she says. Already, sizable donations have been made through the new foundation. By year-end, almost $15 million had come into it, Ryan said. That means, this year, close to $750,000 will flow to charitable groups from donations given in the program’s first 2 1/2 months, alone.”

Why are the banks becoming involved? Eyeing the large, and growing, assets of the charitable sector, the banks recognize that this new-style philanthropy stands to become big business in Canada. It used to be only Canada’s very wealthy families, motivated by guilt and a sense of noblesse oblige, who established foundations. Prior to the 1960s, there were fewer than 20 private foundations in Canada. Today, there are roughly 1,950, many created in the past 10 years. In 2002, Canada’s foundations had $11.9 billion in assets, up 32 per cent in two years. Bankers expect as much as a trillion dollars to change hands over the next decade as the boomer generation inherits the wealth of its parents. Logically, some of that money will fund philanthropic endeavours.

Ricker says Bank of Montreal is involved because it’s the right thing to do. “Yes, I’ve brought in new business,” she says, but a big part of what she’s doing is preparing the way for a sea change in the bank’s culture. Philanthropy is not charitable giving, she says. “It is wanting to get at the roots of the problem and have a lasting impact. For that, you have to have structure and you have to be involved in an active way,” she says. “This is more demanding, and more satisfying.”

When Maggie Bras’s children were teenagers, she opened her home to some of their troubled friends, allowing them to move in for extended stays and even becoming the legal guardian of one adolescent. Now these kids have become thriving adults who, with their children, are a part of Bras’s life. She sees the new foundation in a similar light. “I’d like to have the same kind of hands-on experience,” she says. “Like the children in my home, I would like to see the results.”